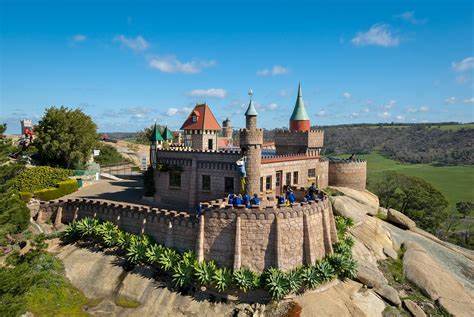 Once upon a time in 1959 some dreamers opened a fairytale and fantasy realm hereby establishing Australia’s first themed park.

Since then it has grown and become a very unique and magical place dedicated to the art of bringing back to life the ancient fairy-tales, myths and legends of a time long ago.

Fairytale Land: Follow the yellow brick road and explore Fairytale Land to find fabled tales collected by legendary European storytellers.
Peek into the world of many favorite characters, from Little Red Riding Hood, Puss in Boots, Pinocchio, Aladdin, Snow White and Sleeping Beauty.
Housed in beautiful castles, cottages and caves all set amongst neatly hedged gardens, giant boulders and twinkling water features.
Enjoy over 22 animated hand-crafted scenes that will come to life at the push of a button and tell their legendary stories of lore!
Witness Cinderella at the Grand Ball, squirt the Frog Prince at his waterfall, see Jack in his beanstalk, join the Teddy Bears at their Picnic and hear the story of Goldilocks and the Three Bears among many others.
‍Camelot Adventure Playground: Go back in time to a place of round tables, Knights, feasts and fair maidens and become your very own knight, princess, hero or villain. Explore secret passages and the many tunnel mazes of this medieval playground, climb daring towers, creep through darkest dungeons, rescue damsels in distress, but beware of Merlin and his dastardly magic tricks! Mystical creatures, giant slide and things that spin and swing will keep both parents and kids busy for ages. Be totally awestruck by this amazingly original creation and enjoy Australia’s most uniquely themed adventure playground.
Model Trains: For train buffs, the hilltop Castle incorporates a model train set and train museum housing a rare collection of classic Märklin branded model trains.
Summit Views: Nestled beside the extinct volcano of Mt Anakie, the summit will delight you with its breathtaking 360° panoramic views from the local countryside to Corio Bay.
Mystic Hallows: Ride a unicorn, perch on a three headed Hydra or be brave and side up to a Hippogryph. Great photo opportunity not to be missed.